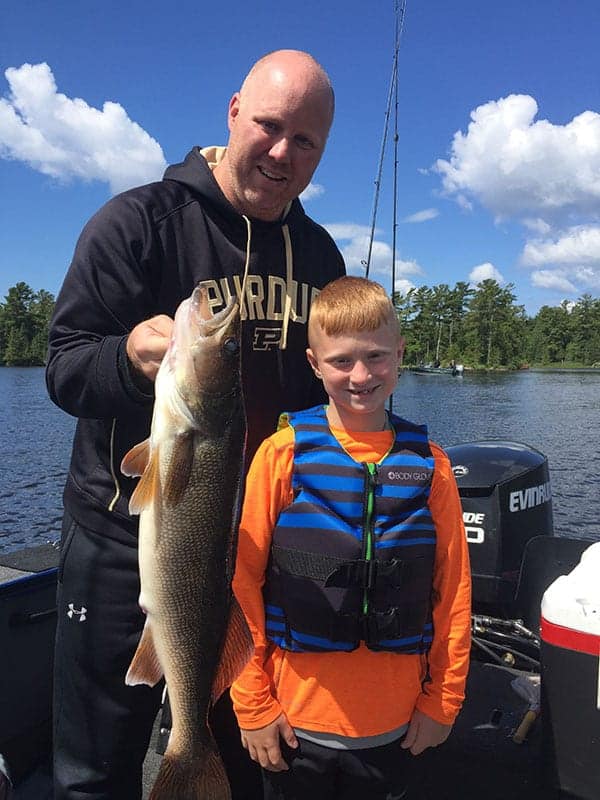 Lake Vermilion Minnesota walleye fishing attracts both serious and casual anglers with its combination of “eater” walleyes and photo worthy catches. Everett Bay Lodge guest Mike Rosinski caught and released the walleye shown above – a 32″ beauty. Over the years, a 34″ walleye is the largest we have seen among our guests.

The central location of our Minnesota fishing resort on the Eastern portion of Lake Vermilion makes a great home base for your walleye fishing adventure.

Since 1969, The Department of Natural Resources has been stocking Walleye in Lake Vermilion and maintains a hatchery on the lake from which most all northern Minnesota lakes are stocked.

In excess of 33,000,000 Walleye fry have been returned to Lake Vermilion from the DNR hatchery. That, combined with “catch and release” practices, assures future walleye populations for generations to come. Follow this link to see some video of the 2019 hatchery work in progress. https://www.everettbaylodge.com/lake-vermilion-pike-river-hatchery-2019/

A 2016 release of Al Lindner’s Angler Edge segment highlighted the fantastic walleye fishing on Lake Vermilion can be found in this entry on our blog. https://everettbaylodge.com/al-lindner-angling-edge-on-lake-vermilion-muskies/