Lake Vermilion late May fishing has continued to show some inconsistency.  While some guests have been happy with their success, others have found a tough bite.  Minnows continue to be the bait of choice for the walleyes and jumbo perch, and artificials are producing bass and northerns.

It is redundant, but the bigger walleyes are still shallow.  Lots of smaller ones and eaters are being caught in a range from 20 – 32 feet.  Unfortunately what was an unusually warm week last year has been unusually cool this year.  Weed growth is well behind normal.  Lake Vermilion water temp is stuck in the low 50’s and an overnight low tonight of 34 degrees won’t help move it in the right direction.   Today’s rain should clear out by noon, but the temperature will hover in the 40s all day.  A couple 70 degree days have finally shown up on the extended forecast.

This is when water temp is especially important.  Sometimes returning guests are apt to target the same spots that produced fish for them in years past when they fished Lake Vermilion at the same time.  That can serve as a starting point, but be open-minded as on May 29th last year shallow bays were easily 20 degrees warmer than present.  Same thing applies to bait.  While some guests tried leeches because they worked in the warmer water last year, today’s colder temps will likely find them curled in a ball around your hook.

Some of the fish we heard about include this one caught by Al Haedrich – a 26.25″ Lake Vermilion walleye. 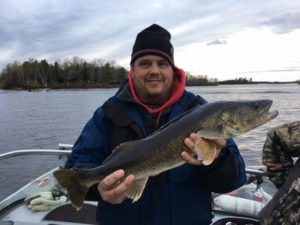 Jay Levine caught & released a nice 25.5″ walleye.  Congratulations to Brad Ayer who caught his PR large mouth bass, measuring 23″.  Robert Everett got in on the large mouth bass action too, catching an 18.5 and two more 18 inchers.  It is really early, but so far it seems like the elimination of the special northern pike reg on Lake Vermilion makes some of the larger pike more worthwhile to clean.  See the new reg info here:  https://www.everettbaylodge.com/new-northern-regulation-for-lake-vermilion/

On another note, many guests will be happy to know that Bayview restaurant & bar will be re-opening later in June, under the same ownership and management as the Vermilion Club.  Sounds like the menu will be similar and additional restaurant docking is planned.  June 15th is a tentative opening date. 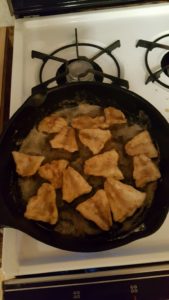