Lake Vermilion August news brings more of the same – great weeks for some of our guests…a little tougher for others.  An early stay outing with a guide for the Lane group was productive.They kept several walleyes for the skillet and released the nice 25″er shown above caught by Kelsey.  Guests had mixed reports, with those that caught walleyes doing well with crawlers in 18 – 24 feet.  The Lanes found a good weed bed that produced lots of northerns and bass.

The Dirmeier family made their first trip to Lake Vermilion.  They marked a 50″+ musky of the “to do” list.  It was one of those awesome resort owner experiences on Saturday evening when the Dirmeier boys came in with their map, asking Dave to “just mark the sure musky spots.”  He reminded them that they were chasing the fish of 10,000 casts.   They were quick to tell him they knew that, but wanted him to just mark the spots where they were sure to see multiple fish!  That was Saturday evening.  On Sunday we asked the boys how they were doing, and they said they boated a 39″ musky, a 34″ northern, and their dad got his PR 50.75 musky.  Now that’s a nice start to the week. 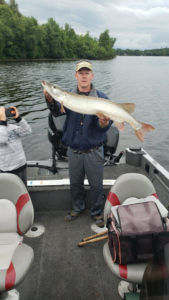 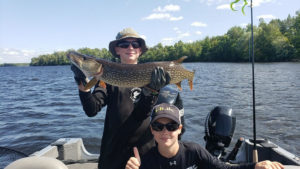 Add some nice bluegills and jumbo perch to the mix, and there were plenty of smiles to go around.  Gotta love it when we get to host young people with a passion for fishing! 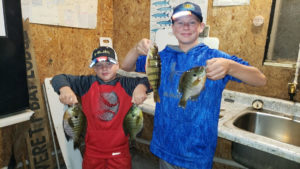 In addition to fish for the skillet, some of the bigger ones we heard about incude the 50.75″ and 39″ musky for Alan Dirmeier, a 34″ northern for Sawyer Dirmeier and a 25″ walleye for Kelsey Coomes.  There were many smallies and northerns caught as well.

We have finally gotten some much needed rain.  A stretch of days under 70 degrees is moving the water temp down to the mid 60’s.  It seems that the walleye bite is improving as a result.  The trolling bite has picked up and rigging is producing limits as well.  We have a couple teams fishing the high school Bass tournament out of Fortune Bay.  Check back next week to see how they fared.

We love September on Lake Vermilion.