When is the summer of 2019 coming to Lake Vermilion?  We are half way through June and it hasn’t arrived yet.  While we were happy to get a couple nice days last week, they were just enough to remind us what we seem to have missed so far this spring.  So what has that meant for the bite?  For many last week was a pretty solid week.  Fish have yet to fully transition to the traditional mid June spots, but both shallow and 16 – 25 foot water depths were productive.   Leeches seemed to be the bait of choice for both walleyes and smallies, but there were groups who continued to find fish interested in fathead chubs.

8 of our 10 cabins housed returning guests, with some of those being Lake Vermilion long time anglers.  What did they say?  The large Badger/Gopher group in the big house bumped their fish fry up earlier in the week as they had caught plenty of numbers and were ready to eat some fish!  They said it was the best week they had in several years.  In addition to plenty of eaters, they shared the picture above as well as these: 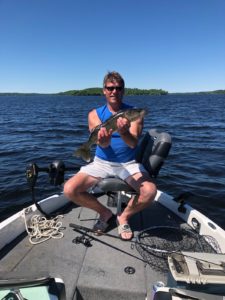 The smallmouth action was good as well, with several fish over the 18″ mark being caught.  Tim Magee shared pictures of a couple of many he caught during his stay. 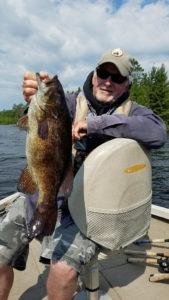 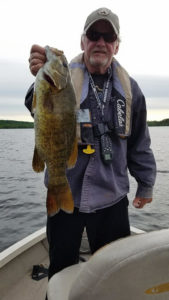 And so that you don’t think he is one dimensional in his fishing, how about these too?  Walleyes for the skillet. 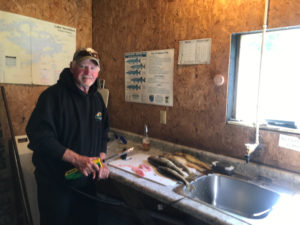 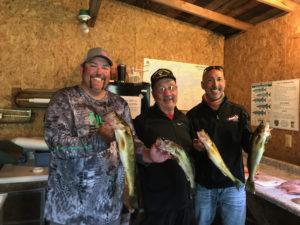 Some of the nicer fish our guests told us about include:

The Lake Vermilion water temp this morning in Big Bay was 63 degrees and our bay was 62 degrees.  Re-visit this blog post if you are interested in seeing how things are shaping up compared to last year.  https://www.everettbaylodge.com/kids-catch-fish-on-lake-vermilion/

If we can trust the 10 day forecast, this week should be the end of the extended spring, with next week’s highs expected to settle in for some comfortable 70+ degree days and maybe a more normal pattern.  We are down to just one cabin for July, Cabin 2 starting July 6th.  Then just three nights in Cabin 3 beginning July 30th.  The first week of August when the 10% off rates kick in there is just one cabin left for the full week.